Here’s a most basic and shortest explanation of the “Cycle of 5th” and how the 12 Keys in Western Music are created from each other.

One of the most fundamental difference between all kind of Western Music (Classical, Jazz, Rock/Pop, etc) and Indian Music is, that within one piece of music we constantly change the root notes, and more or less often also the “key”. To get a clear picture of the basics, one needs to understand those “keys”, and further, one needs to understand what it means to harmonize a scale.

This article is about understanding the 12 keys. Here they are: 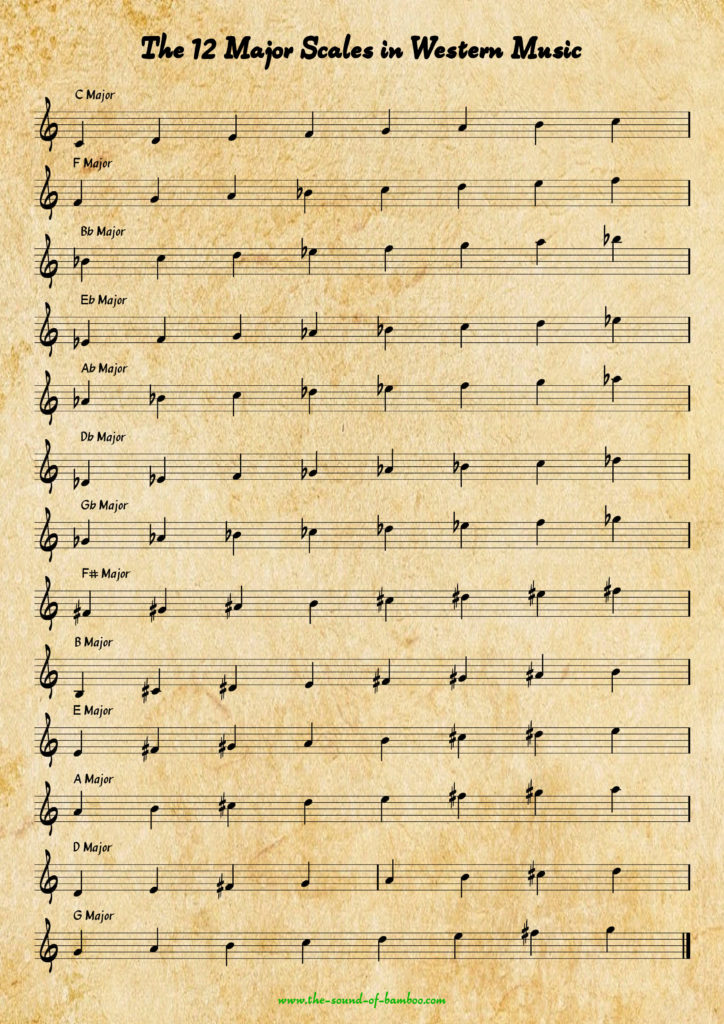 What you see here is actually the same scale, but from different root notes. The scale is a plain Major Scale, or to be more precise, the “Ionian Scale”. In the key of C this scale looks like that:

What defines the scale, and also what creates the specific character and mood of it, is the structure of the intervals between each other (marked as “wt” – whole tone and “ht” – half tone), but also the relation of each of the notes to the root note (indicated by the numbers, r is the “root note”). When those numbers are given without a “b” or a “#”, they are the intervals from this plain major scale, the Ionian.

We can see that this Ionian Scale is build of 2x whole step, one half step, 3x whole step and another half step. When we build this exact same structure from any other root note, we will get the same type of Ionian Scale, but in another key.

This structure of “wt-wt-ht” we can find TWO TIMES in the scale: from r to 4, but also from 5 to r! This is what we can utilize here, in two ways.

G is the 5 of C, and from G onwards we have this structure already. To continue in G, in the end we just need to raise the new 7 in order to have a “maj7” again. The f in relation to the g would be a flat-7 (b7), and the wt-ht structure would change. To get a new Major Scale (Ionian), only this one note needs to be changed, and we have a G Major Scale. Whenever we talk about “Major Scale” now in this article, we mean the Ionian Scale!

You see, this new G Major Scale has the same structure, and the same intervals towards the root note, as the previous C Major Scale. This we can repeat over and over again, which means that we do move through the “cycle of 5th”.

To go through the cycle of 5th means, to raise the 7th note each time.

But we can also go another way. When we pick up the new scale from the 4th note, so here the C Major Scale starting from the f:

In this case, we need to lower the former 7th note. You see the structure in C Major from 4 on-wards: 4 to 5 and 5 to 6 are whole steps, but then we need a half step. Again, we only need to change this one note to get a new Major Scale with the same structure. In this way we move in 4th, therefore “cycle of 4th”

To go through the cycle of 4th means, to lower the 4th note each time.

There is one more thing about the cycle of 4th, which is of great practical use: In Western Music, and especially in Jazz Music, the V-I relation is of great importance. To fully understand this, you also need to study who harmonization of a major scale works and learn about the basic chord progressions. But just to mention here: going in 4th upwards is the same as going in 5th downwards, and this is the same like this V-I relation.

We will come back on this soon!

But for now, just have a look at this common picture, and see how moving this circle in clockwise direction will lead you on the path of the Cycle of 5th, and moving counter clockwise you are following the Cycle of 4th: 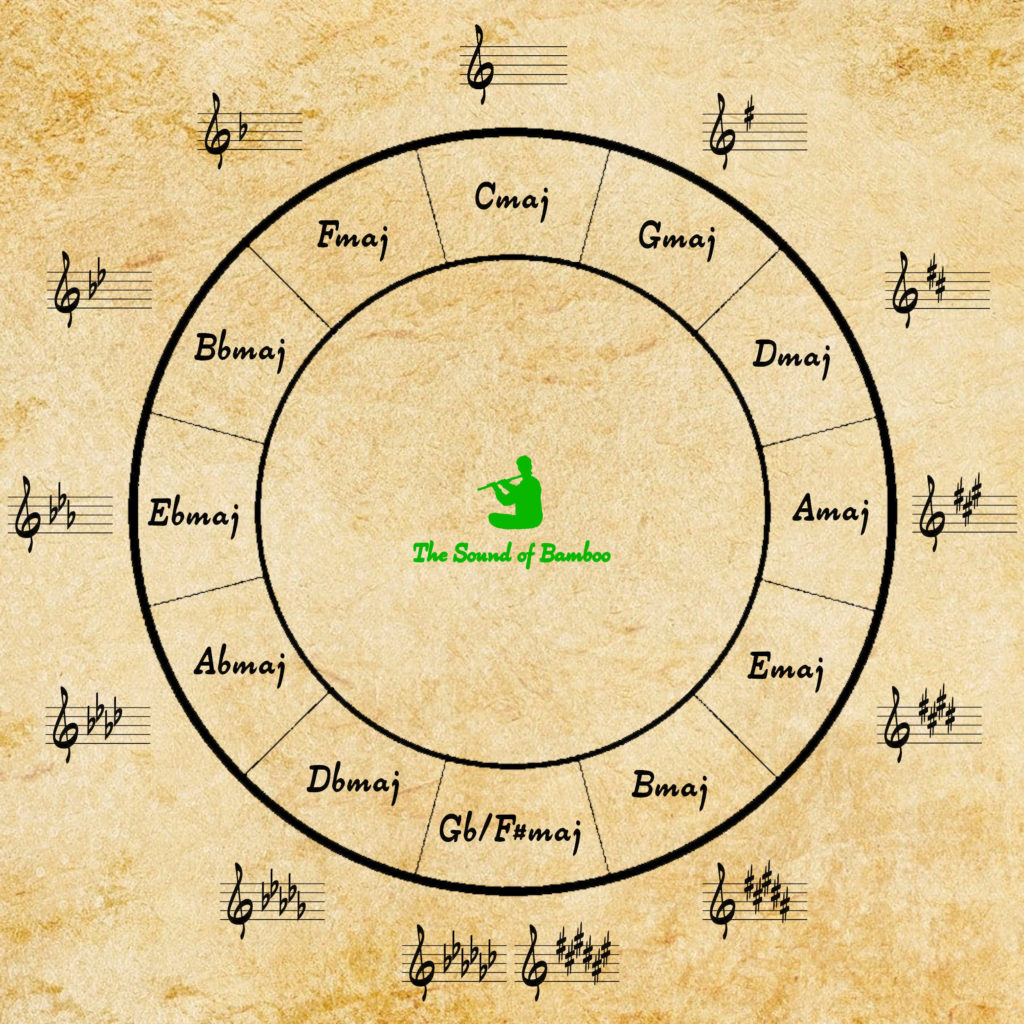 Last thing to mention here is, that we use “#” on the one half and “b” on the other half, why?
This has practical reasons. Theoretically we can go on using only “b” in the cycle of 4th or “#” in the cycle of 5th all the way through, but then in the end we would have ether 12 “b” or 12 “#”. So to avoid having so many accidentals we switch the notation system at the peak of 6 accidentals. We do consider a C# the same note as a Db for instance, therefore this can be done.

At the bottom of the cycle you see Gb Major or F# Major, which is just the same scale. When we go through this practically on the instrument you can easily understand. Just have a try!

Further articles on the basics of Western Music Theory are on the go, so please stay tuned and sign up for the newsletter (scroll to the bottom of the page). And in case you need some personal teachings, just consider to book some online private lessons!

Thank you and all best,
Michael

Share this page:
The 12 Keys & The Cycle of 5th in Western Music